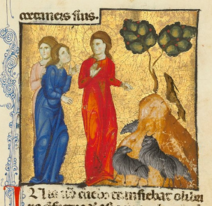 There has been a smidge of progress for the RSpec Study Group. Part of the issue is I am not clear how to go about it. I talked with The Fonso and Ginny Hendry about it, and they gave me a few ideas. Even though I am calling it the “RSpec Study Group”, we will cover other frameworks as well. The RSpec book covers Cucumber for a couple of chapters before it gets to RSpec.

Perhaps we will have a meeting a week.

One week will be going through a chapter in the RSpec book.

Another week could be a hack night where we write tests for someone’s project.

Another week could be a lecture from someone in the community. Ginny pointed out that people have pretty set opinions on testing, and it would be good to expose people to multiple viewpoints. I talked to one of the developers of gathers.us if they would be willing to share their ideas about testing. One of the reasons they made gathers.us was to get experience with Cucumber and Capybara.

Image from Book of the Passion of Saint Margaret the Virgin, with the Life of Saint Agnes, and Prayers to Jesus Christ and to the Virgin Mary, a manuscript made in Bologna in the late 13th century. Image from World Document Library, assumed allowed under Fair Use.