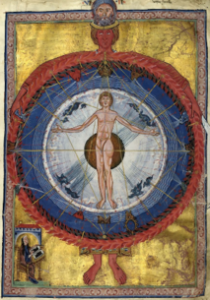 There are more updates to the Groovy Validator project.

I got regular expressions working for StringAnnotation in POGOs and immutable objects.

IntAnnotation and LongAnnotation now have an optional argument called “divisorSet”. If you want your number to be even, you can add the set [2]. If you want it to be divisible by 3 or 7, you add [3, 7].

I also changed the exception messages and did some refactoring. There was some repetition I moved into methods. Handling doubles and floats was pretty much the same, and integers and longs were almost the same.

I think the README and groovydocs explain things pretty well.

Image from Liber Divinorum Operum (The Book of Divine Works), a 12th century manuscript by Hildegard von Bingen housed at the State Library of Lucca, image from World Document Library, image assumed allowed under Fair Use.