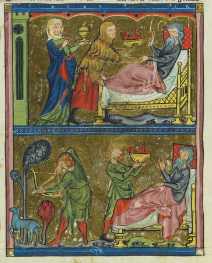 Right now I have implemented most of RFC 1939 (POP3) and RFC 5231 (SMTP). (I do not plan on implementing RFC 3501 (IMAP).) I can send email from another account to my GES, and I can retrieve them locally using Alpine. So far I would call it pretty successful.

I have written this using PostGres. I have the tests actually writing to the database. I know a lot of test purists will object, but I saw an article linked from Hacker News: Don’t test with SQLite when you use Postgres in Production. One of the comments was a quote (supposedly from NASA): Test what you fly, fly what you test. Maybe it’s not the absolutely best way to test and develop, but as Voltaire wrote: Do not let the perfect be the enemy of the good.

Image from an 12th century manuscript housed at Kantonsbibliothek St. Gallen, image from e-Codices, assumed allowed under Fair Use.

There are 282 words in this article.