A week or so ago I went to the Austin WordPress Meetup which featured a presentation about Gutenberg.

Gutenberg is the upcoming editor for WordPress. I admit I did not quite understand everything that was said. But it means there are some big changes coming up. It will allow WordPress to interface with many different types of systems that it cannot talk to today. At one point, the presenter theorized that in a few years WordPress may not use themes as we understand them today. This could put some people out of work; I think there are several companies that sell WordPress themes.

Gutenberg will be written with React. I do not like JS and try to avoid it as much as I can (too much churn and reinvention of wheels), but this might help solidify React’s ranking. As WP people love to point out, WP powers 20-25% of all web sites. The presenter said that Drupal will be moving to Gutenberg as well (although I later found out this is not a sure thing).

I have toyed with the idea of porting WP to another language, even though it would be a massive undertaking. A lot of developers do not like PHP. When I was getting into Ruby and Rails, I joined the mailing lists for local Ruby/Rails groups in about a dozen cities. About once a month, someone in one of the cities would ask about any blog or CMS frameworks written in Ruby. They had made a Rails app for a client, and now the client wanted a blog or CMS. A few replies would mention Radiant or Refinery, but it seems like most of the time the original poster would just go with WordPress. Once someone just posted the Most Interesting Man In the World meme. I did have a go at porting WordPress to Rails. 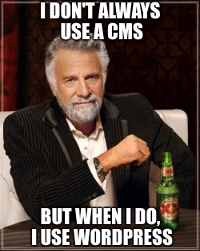 Eric Normand posted a video titled What Clojure needs to grow – a boring web framework and boring data science.  He said Clojure needs a default web framework. At one point he talks about WordPress. It made me think again about porting WordPress to another language. I have not had problems with WordPress, but some sites have, including Naked Capitalism.

It would also be nice to port the WordPress database from MySQL to Postgres. There is pgloader (written in Common Lisp). There is also pg_chameleon, which is written in Python. But the issue is that some people might not like a new system if it does not look and work just like WordPress, kind of like people do not like other office suites. Plus things might change a lot with Gutenberg.

That said, I think if “ClojurePress” becomes a thing, there are a few things it should do out of the box. There are some things that are pretty common that are handled by plugins. Sometimes multiple plugins, sometimes plugins that have not been updated in a while. Maybe some of these are things that only I want, but here is my list:

I do not know where I got The Most Interesting Man In The World  image from, probably ImgFlip.

1 thought on “Thoughts On WordPress”