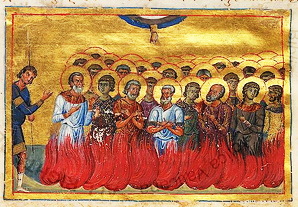 In one of the lessons on Purely Functional, there is an interesting use of anonymous functions.

In version 3.17 of core.clj, we saw this in the function add:

We see a call to “cond”. It uses the type of the ingredient to decide which function to call.

In version 3.18 of core.clj, he adds a map with anonymous functions:

In version 3.19 of core.clj, he gets the functions out of the map and sets them equal to a symbol, replacing the cond:

I will also look into Apache Kafka. I went to the Apache Kafka meetup recently. I think it will be important going forward.

Image from the Menologion of Basil II, an 11th century manuscript housed in the Vatican Library; image from Wikimedia, assumed allowed under Fair Use.