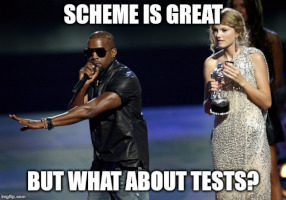 I have been taking a break from Simply Scheme. I got stumped on one of the exercises. I started doing the exercises in Clojure for a couple of reasons. One is that is the most commercially viable Lisp out there right now. Another reason is that I want to run automated tests. I would like to be able to quickly run a function multiple times with different inputs. I was typing and re-typing the same calls over and over. Or I could just use tests.

I do not know how to do tests in Scheme. I was using Chicken Scheme for Simply Scheme. There are a few “eggs” for testing, but the instructions were not that great. Also some of them were not working on the version of Chicken that I was using for Simply Scheme. I use Chicken on Ubuntu and Cygwin, and not directly; they are a bit behind the official version. I did find out recently there is an SFRI for testing. It is implemented by Kawa, so perhaps I could have used Kawa. I do not plan on building any apps with Scheme, or using it long-term. It is just a vehicle for enlightenment. I do not know what the most common test libraries are, and I do not want to spend time on something that I might not be able to use later. Clojure has testing out of the box.

I also started looking into using Racket. I have thought about it before, since there are a lot of language modules for Racket. There is one for Simply Scheme. I also found out about an Emacs mode for Racket. I am just running some tests from some .rkt files, but from what I understand, this is intended to be a replacement for Dr Racket. I do not know how to make an app with Racket, but right now I do not need much. I think I might be better off going with Racket, even if I am using a Scheme language module. While Racket is pretty rare, it is used more than Scheme.

Image from ImgFlip, assumed allowed under Fair Use.

There are 393 words in this article.