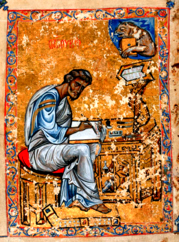 There was another meeting this week of EmacsATX, the Austin Emacs Meetup group. For this meeting there was no predetermined topic.

Most of the attendees were in Austin, but we had a few from other states.

#1 is one of the organizers. I think he works for the City of Austin, and does not use Emacs much at his job.

#2 has a math degree and makes machine learning software.

#3 is a student in Massachusetts. He did not specify which school. He uses Emacs to program in Haskell (which was the first language he learned), Common Lisp, and Perl.

#4 is a sysadmin in Tennessee. He was one of the few who lives the dream of using Emacs for his job. Now that I think about it, I should have asked him why he likes Emacs, since a lot of sysadmins prefer Vim. Granted, he could use both. I recently logged into a system that had only Vim and I was able to make a small change. I was not converted.

#5 is another machine learning developer in Austin.

#6 presented a few meetings ago on Rational Emacs (now called Crafted Emacs). He is a software developer in Oklahoma City. I asked him if he knew the presenter from last month before the presentation, and he said he did not. (I know there are around 700,000 people in OKC, but it was a possibility.) We did spend a few minutes chatting about Oklahoma City in general. Like its economy, the OKC tech scene is dominated by oil companies. The capitol building is on top of an oil field, one of the few in the country in an urban area. #6 uses Emacs for several languages for his job, and is also living the dream. I do not remember what languages he uses. I think Python is one of them.

I was hoping the presenter from last month would be here. I think he learned Emacs not too long before he submitted his talk to EmacsConf. If he is a beginner and able to put executable source code into an Org file, then whatever tutorial or book he used was effective.

#7 is a local Austin developer, living the golden dream: Using Emacs to write Clojure. He showed us running Emacs on his iPad using the iSH app. A few people wondered how long it will be until Apple cracks down on this, and whether you can run Emacs on Android.

#3 mentioned shx for Emacs (or “shell extras”), which extends Comint mode. Per the Emacs manual, Comint mode is “a general-purpose mode for communicating with interactive subprocesses”. This led to some discussion about shell modes in Emacs. #6 said that since there are modes for every programming language he uses, he does not do much in the shell since the modes have commands for most things he needs to do. “There’s a mode for that.” I have been spending time with eshell. #1 pointed out eshell works wherever Emacs does, and you can run ELisp code in it, so it is portable and powerful.

The discussion then pivoted to comparing Lisps. The consensus was that Clojure might be The Lisp That Sticks, and that since it is on the JVM it handles dependencies better than most Lisps. I pointed out that a lot of Racket packages do not have version numbers or version numbers for their dependencies, which horrified a couple of people. A few of us agreed that Dr. Racket looks cartoonish, and Racket Mode is much better.

#7 mentioned that Edsger W. Dijkstra wrote a letter to the UT CS department complaining about the decision to drop Haskell as the introductory language. The more I read about Dijkstra, he seems like the sort of person who is only happy if he has something to complain about. #3 started with Haskell, and then went to Prolog before finding Lisp enlightenment. #7 was a CS student at UT when Dijkstra was there. He regrets not taking a course with Dijkstra. Apparently, EWD did teach undergrads. But #7 decided not to since the grade for the course available was based on one oral exam. #5 pointed out that sometimes you don’t know you are in the “good old days” while they are the good old days.

#7 also posted a link to a book by Edgar Graham Daylight, who blogs about EWD at Dijkstra’s Rallying Cry for Generalization. You have to go to the “Recent Posts” list on the right to see the latest post. The post on the front page is the one of the first posts from 2011.

I give people numbers since I do not know if they want their names in this write-up. Think of it as the stoner’s version of the Chatham House Rule. I figured that numbers are a little clearer than “someone said this, and someone else said that, and a third person said something else”.

Image of Saint Luke from the Gelati Gospels, a 12th manuscript housed in the Georgian National Museum, assumed allowed under Public Domain.