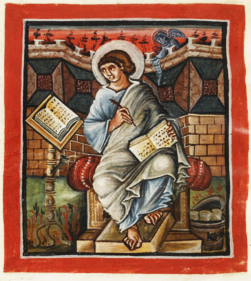 There was another meeting of EmacsATX, the Austin Emacs Meetup group last week.

The presentation was on Rational Emacs (now called Crafted Emacs). It is a configuration meant for experienced Emacs users.

The presenter went through the github repo. The principals of the project are as follows:

This is geared towards experienced Emacs users who want some help with a configuration, but don’t need every popular mode on the planet, as you get with Prelude, Spacemacs or Doom. Some attendees tried it out during the presentation and liked the fact that it started up very quickly.

There are a couple of user group meetups this week that I had a part in organizing.

On Tuesday, Roger Brinkley, the host of the Java Spotlight podcast, will speak at Austin JUG. He has spoken at CJUG a few times. I put him in touch with the leader of the Austin JUG. I did not know that Roger would be in San Antonio this week. So it was a pretty nice coincidence that he happened to be in Texas this week.

Then on Thursday, Ken Kousen will speak at the Austin Groovy and Grails group. I am on the list for the Houston JUG. He spoke there a few months ago. I went to his website, and he was going to speak in Houston and Dallas in the same week. I just emailed him out of the blue, and I told him there is a Groovy/Grails group in Austin. I told him he should speak in Austin someday. He emailed me back, and said it was not possible at that time, but he would like to do it someday. I put him in touch with the organizers, and he will be here on Thursday.

I still am going through Programming Concurrency on the JVM by Venkat Subramaniam.

I have hit a bit of a snag. I am on the chapter covering Actors. He uses the Akka library, but he uses an old version of it. A lot of the packages have changed, and I could not find some of the classes in the documentation. I would like to say that it is nice that they now have javadoc in addition to scaladoc. Frankly, I am not too thrilled with Scala. The Java code that calls Clojure STM classes still works.

Also: Venkat S was here a couple of days ago to speak at the Austin JUG. He gave the same concurrency talk I saw a couple of years ago at No Fluff Just Stuff. I took some notes, and I will post them in a few days. Some of the Java 8 stuff looks interesting.

Image from an 11th century manuscript made at the monastery of St. Gall,  housed at the Jagiellonian Library  (Wikipedia page here), image from e-Codices, assumed allowed under Fair Use. 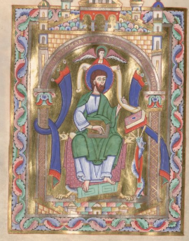 The Chicago Ruby Testing Group is currently on hold. We are revising the curriculum. We will also probably only do it once a week instead of twice a week.

Right now I am working on a short presentation on Cucumber. A big chunk of it will cover why will not be spending a lot of time on Cucumber. A big reason is the network effect: It seems like a beast, yet it does not have a lot of traction. But people might encounter it, so I think we should cover it. 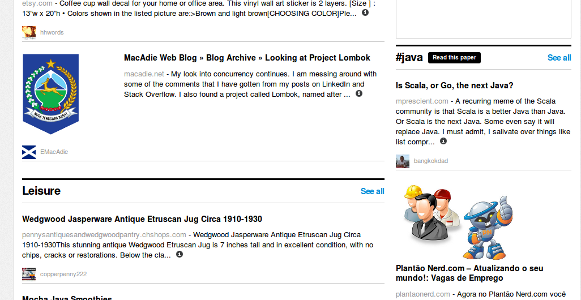 My post about Project Lombok was mentioned on Paper.li. One of my Twitter followers (a lovely young woman from Tunisia who is now in Paris) has a few of these daily newspapers set up. One of them is called Java And Beyond. (My post is waaaay down near the bottom.)  I think what it does is look for hashtags amongst her followers and aggregates them into one page.

I will not put the Java hashtag on the tweet for this post. That would be cheating.

Screenshot from a now non-existent page on Paper.li, assumed allowed under Fair Use.

Last night I went to the meeting for the Chicago Groovy Users Group. The presentation was a web framework that uses a bit of Groovy, but uses a lot more Java called the Play Framework.

Does the world need another framework? Maybe not. But this one looks interesting. It is a lot like Ruby On Rails, or Grails. You do a lot of stuff from the command line, and you do not need to restart to see your changes. It is REST based, and everything is stateless, so it is easy to scale. It uses “convention over configuration,” like many other frameworks.

I guess there is interest in getting Scala to work with Play. I do not really see the point of that. Scala and Groovy moved a lot of the boilerplate of Java into the languages, while Play seems to move the drudge work into the framework.

And, of course, I asked the speaker to present at CJUG.

Image from Play Framework website, assumed allowed under Fair Use. 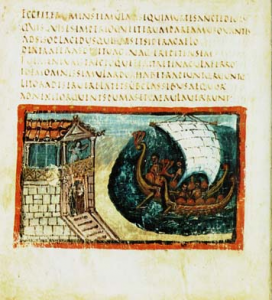 We have another CJUG Meeting on February 15, 2011. Ray Ploski of Red Hat will talk about Drools. You can find info on the CJUG site here. You can RSVP for it here.

The past few CJUG meetings have gone pretty well. We are now having them at CME. It has really helped our attendance. We used to be lucky to get a dozen people. Now we get about 30. The RSVP software we are using is called gathers.us. It was made by a few guys here in Chicago. It uses the “freemium” model, and free events are limited to 50 responses. A few times we hit that limit. If we keep hitting it consistently we might have to either find something else or convince the GathersUs developers to increase that limit. They have responded to some feedback from me and a few other people, so we will see what happens.

For future CJUG meetings, there are some plans in the works. I will probably give a presentation in March on Android. Jeff Palmer of the Chicago Groovy Users Group will give one in April about Grails. Someone from a local consulting firm might be able to give one about hooking mobile apps up to JEE servers.

If anyone could do these (or point me to existing presentations that I could use), that would be great. Alternatively, I could collaborate on these with someone. We could set up a GitHub account and hash out a presentation deck and some code; I think using Maven would be the best bet. I do not have a Mac, so the deck would have to be in OpenOffice. 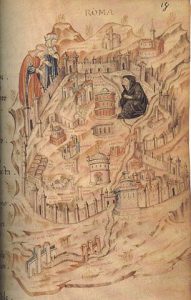 I attended one of the big data talks and two of the JVM language talks: Scala with Daniel Spiewak (website, twitter) and Clojure with Aaron Bedra (website, twitter). One of my goals is to learn a functional language. I was going to look at Scala, but now I am thinking about Clojure. There are a lot of braces, brackets, parentheses, arrows and other stuff in Scala. It looks like line noise to me. I am still getting used to the parentheses of Lisp.

I have been reading a few articles on Lisp (such as this one and Paul Graham’s articles), and I starting to go through Practical Common Lisp. So I will go through that and check out Clojure a bit more.

We had a meeting for the Chicago Java Users Group on the 16th. Michael Segel gave an intro to Hadoop. He is the co-founder of the Chicago Hadoop Users Group. Contact them to find out more about Hadoop. A lot of companies in Chicago are using it.

I attended a meeting for Chicago Android. I stayed for an hour, but they could not hook up one of the big screen tvs to the host’s laptop. I am starting to get serious about Android.  It has taken me a while to think of an app to make, but I am starting to get a few ideas. There seems to be a big push to make Chicago a big center for mobile and Android development.

I also attended a seminar put on by Morgan Stanley about private equity. The speaker was one of the founders of Hyde Park Angels. The venture capital/startup community in Chicago seems pretty big. He gave some interesting statistics about the amount of money invested in companies throughout the state of Illinois (with Chicago being about half):

So it looks like the economy is looking up. There is another indicator: The floor I am on at work is filling up.

Image from Wikimedia, assumed allowed under Fair Use. Image from Bibliotheque Nationale, MS It. 81, around 1310. 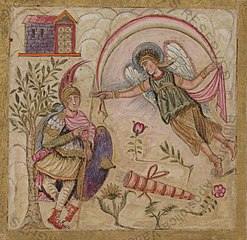 Last night I attended the Chicago Groovy Users Group meeting. The speaker was David Klein, author of Grails: A Quick-Start Guide. He talked about using REST web services in Grails. He said that people are moving away from using SOAP and that REST is the most common way people do web services. He also said many people are doing things that are REST-like. He said the guy who formulated REST gets upset when people call something REST when it is not. So I will start looking at REST.

He also said that Chicago is one of the big Groovy/Grails/Griffon cities in the USA. The Groovy/Grails developers work for SpringSource, the company behind the Spring Framework. So I will take a closer look at Groovy as well.

He also announced that the next SpringOne conference will be in Chicago in October. It was a pretty good meeting overall. 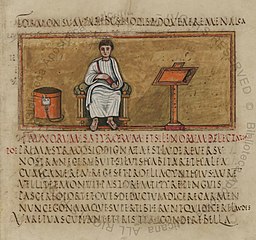 We had a Chicago Java Users Group meeting on April 20th. Our speaker was Damodar Chetty, a consultant from Minneapolis. He talked about Tomcat configuration. There was a bit of a problem: We did not have a projector. Every room we have reserved at Loyola has had a projector, so I assumed we would have one this time. There was a very large projector screen, which was ironic. I put in a request for a projector, but it did not go through properly. Damodar did pretty well under the circumstances. If you need a speaker for your JUG, contact him at his site.

I posted to the JUG Leaders list for advice on how to handle this in the future. Someone said one thing to do is get the speaker’s notes ahead of time and be ready to print out copies or copy the file from a thumb drive. Another one of those brilliant and practical ideas that never occurs to you when you really need it.

I am still looking for a job. I talked with a recruiter a couple of weeks ago who gave me some good advice on my resume. I am reworking it, and I think it is a lot better. I am also getting more focused. I started learning Ruby, and I will continue with it, but I may pull back on that a bit. I will re-focus on Java and JVM languages and technologies: Java, Scala, and Android. There was an Android workshop put on by Chicago Android. I learned a lot, and I will get more into Android. Recently I got a free Droid phone. I will go to Verizon and see what it would cost to use a plan for Droid.